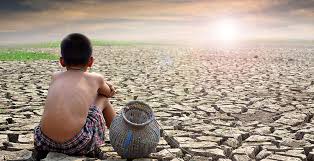 As long as humans have been on Earth, they have been adapting to changes in regional climates. A regional climate is the average of the weather for a relatively long period of time, usually 30+ years, at a particular location on the planet. The natural periodicity of prolonged regional weather variations has been documented in various ways by humans for eons. For a comparison of human civilization in the northern hemisphere to Greenland ice core temperatures for the last 18,000 years see here. Some of the means of documenting changes in long term weather patterns, i.e. climate change, include crude prehistoric cave drawings of the animals and plants, paintings of frozen rivers (see Figure 1 of ice skating on the River Thames in 1684), and archaeological digs. There are also written records of climatic conditions as early as 5,000 years ago, perhaps even earlier. Ice, subsea, peat and lake bed cores are also used, for a more detailed discussion of the methods used see here and the links therein.

Figure 1. Ice skating on the River Thames in London in January 1684, during the Little Ice Age. Museum of London, link.

Most geologists agree that we are currently in an extended ice age. Technically we are in an "icehouse" condition (see here). When ice caps exist on one or more poles year-round for an extended period of time, the Earth is said to be in an icehouse. Global temperature may decrease further if the solar activity remains at its current low level (see here). But geologists deal in massive time increments of thousands, millions even billions of years. The general public makes its observations in decades, perhaps a generation and maybe even in a century, but not much more than that. Such a myopic view of the Earth's climate can be misleading.