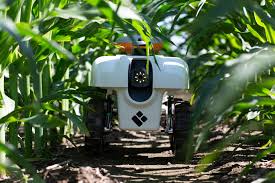 In a research field off Highway 54 last autumn, corn stalks shimmered in rows 40-feet deep. Girish Chowdhary, an agricultural engineer at the University of Illinois at Urbana-Champaign, bent to place a small white robot at the edge of a row marked 103. The robot, named TerraSentia, resembled a souped up version of a lawn mower, with all-terrain wheels and a high-resolution camera on each side.

In much the same way that self-driving cars "see" their surroundings, TerraSentia navigates a field by sending out thousands of laser pulses to scan its environment. A few clicks on a tablet were all that were needed to orient the robot at the start of the row before it took off, squeaking slightly as it drove over ruts in the field.

"It's going to measure the height of each plant," Dr. Chowdhary said.

It would do that and more. The robot is designed to generate the most detailed portrait possible of a field, from the size and health of the plants, to the number and quality of ears each corn plant will produce by the end of the season, so that agronomists can breed even better crops in the future. In addition to plant height, TerraSentia can measure stem diameter, leaf-area index and "stand count" — the number of live grain- or fruit-producing plants — or all of those traits at once. And Dr. Chowdhary is working on adding even more traits, or phenotypes, to the list with the help of colleagues at EarthSense, a spinoff company that he created to manufacture more robots.