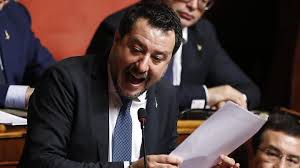 Italy's Senate has voted to allow prosecutors to put far-right leader Matteo Salvini on trial over charges of holding migrants at sea.

Mr Salvini, who previously served as Italy's interior minister, is accused of illegally keeping people on a boat off Sicily for days in August 2019.

Some 116 migrants remained aboard the Gregoretti for close to a week.

On Wednesday, a majority of senators voted for the trial of the anti-immigration League leader to go ahead.

Mr Salvini has repeatedly said he wants to go to court. He told the chamber he wanted "to tell the world" that his migration policies "saved tens of thousands of lives."

"I am absolutely calm and proud of what I have done. And I'll do it again as soon as I get back into government," he said later.

Senators from his League party left the chamber rather than take part in Wednesday's vote.

Under Italian law, ministers have parliamentary immunity for actions taken while they were in office. But a committee voted last month to strip Mr Salvini of his immunity – leaving the final decision in the hands of the Senate on Wednesday.