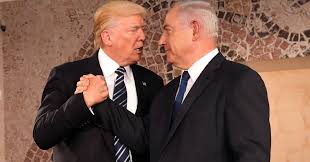 So on a recent morning in which I had planned to write a column about Israel/Palestine, I jammed out to the Jay-Z & Beyonce's famous original power-couple-jam, "'03 Bonnie and Clyde." The song revolves around a former street dude and his loyal girlfriend, ready to face off against the world like the title's outlaw couple.

Ironically, this got me thinking about the U.S. and Israel, President Donald Trump and Israeli Prime Minister Benjamin (Bibi) Netanyahu.

Because, if we're honest with ourselves, the ditty could just as easily describe the still-fresh political romance of "B and D," as well as the 70-year relationship between the US and Israel.

Prime Minister Netanyahu has recently, and probably accurately from his perspective, called Donald Trump "the best friend that Israel has ever had in the White House." Netanyahu has proven himself all too willing to exchange political loyalty for gifts, and perhaps no one has offered him more than the 45th president of the United States. These include, but are not limited to: