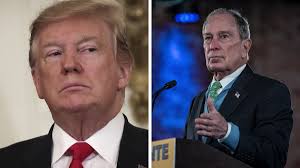 While Bernie Sanders (I-VT) is now favored to be the likely Democratic nominee following Joe Biden's implosion, Democratic voters are going to need to think long and hard about whether a socialist whose policies would wreak economic havoc can possibly rally enough left-wing voters - including moderate Democrats - to come out to the polls in November in large enough numbers to beat Trump.

To put it lightly, things are dismal according to pollsters, who, if you recall from the last election, suck. Left-wing darling Nate Silver's FiveThirtyEight has 'no one' as most likely to win the enough delegates to automatically win the Democratic primary nomination - which would lead to a brokered convention.

Meanwhile, a Thursday Deutsche Bank survey reveals that while Bernie Sanders will probably be the nominee, Michael Bloomberg has the greatest chance of winning vs. President Trump.

The key takeaway this month is how different market expectations are from polling data on the upcoming US Presidential election. This could have major market ramifications going forward. The key issue is that an overwhelming number thought that President Trump would be re-elected in the November election, with 95% viewing it as either "slightly" or "extremely" likely. This level has just been increasing since the question was first posed in November, but there was a massive jump in "extremely" likely voters this month (63% from 43%). This may be on the back of improving approval ratings and high uncertainty about the Democratic nominee. To give some context, polling companies suggest Trump is close to a coin toss of being re-elected. So a huge mismatch. -Deutsche Bank