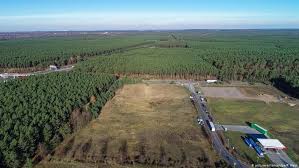 A German court on Sunday ordered Tesla Inc to stop clearing forest land near the capital Berlin to build its first European car and battery factory, a victory for local environmental activists.

The U.S. electric carmaker announced plans last November to build a Gigafactory in Gruenheide in the eastern state of Brandenburg.

The court ruling, by the higher administrative court of the states of Berlin and Brandenburg, comes after the state environmental office gave a green light to clear 92 hectares of forest for the plant.

Planning permission has not yet been granted to build the Gigafactory, however, meaning U.S. entrepreneur Elon Musk's company is preparing the ground at its own risk.

In a statement, the court said it had issued the order to stop the tree-felling because it would have only taken three more days to complete the work.

Otherwise the clearance would have been completed before judges made a final decision on the complaint brought by a local environmentalist group called the Gruene Liga Brandenburg (Green League of Brandenburg).

UMich Consumer Sentiment Crashes By Most Ever

Tesla Cutting "Hundreds" Of Contractors From California And Nevada Factories