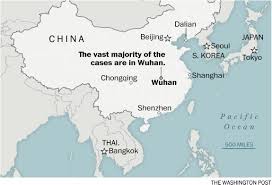 China finally allows US experts in

14 Americans aboard evacuation flight found to have virus

Update (1030ET): For what seemed like weeks after the outbreak began, Tibet repeatedly reported that it had zero confirmed cases of the virus, even after it had spread to every other Chinese province (there are 31 in total).

Now, online rumors might shed some light on why: It's not that the virus hadn't arrived, it's that party leaders in Tibet - for whatever reason (lack of resources, a motivation to impress Beijing) - didn't report the full breadth of the problem.

Unconfirmed reports claim 5 have died in Tibet from the virus.

It's just another reminder that...

"When agents of the state fear no external checks and balances, it is rational for them to bury bad news, right up until a crisis becomes too big to hide: a dynamic that builds instability into the way China is run."
Smart words from @DSORennie this week: https://t.co/zEimI595Kl