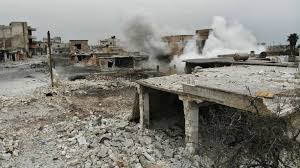 But if not through the perspective of neo-Ottomanism, how to explain the fact he is de facto supporting al-Qaeda remnants in Syria while facing two unsavory options – a humiliating retreat from or total war against the Syrian Arab Army?

Everything about the slowly evolving, messy chessboard in Idlib hinges on highways: the imperative for the government in Damascus to control both the M5 highway between Damascus and Aleppo and the M4 highway between Latakia and Aleppo. Fully reclaiming these two crucial axes will finally turbo-charge the ailing Syrian economy.

The Western spin was always about whether Damascus would comply. Nonsense. In the memorandum, Ankara guaranteed protection of civilian traffic on both highways. It's Ankara that is not complying, not only in terms of ensuring that "radical terrorist groups" are out of the demilitarized zone, but especially on point number 8:

"In the interests of ensuring free movement of local residents and goods, as well as restoring trade and economic ties, transit traffic along the routes M4 (Aleppo-Latakia) and M5 (Aleppo-Hama) will be restored before the end of 2018."

Your Mattress Is Not the Key To a Good Night's Sleep

China to reclassify dogs as pets, not livestock, in wake of coronavirus

Fed Is Seizing Control of the Entire U.S. Bond Market