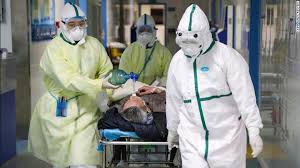 Update (1515ET): State media reports have confirmed that Liu Zhiming, the boss of one of the Wuhan hospitals battling the coronavirus, has died.

It's the first death of a major figure on the front lines of the epidemic since Dr. Li Wanliang succumbed to the virus last week.

Update (1030ET): For what seemed like weeks after the outbreak began, Tibet repeatedly reported that it had zero confirmed cases of the virus, even after it had spread to every other Chinese province (there are 31 in total).

Now, online rumors might shed some light on why: It's not that the virus hadn't arrived, it's that party leaders in Tibet - for whatever reason (lack of resources, a motivation to impress Beijing) - didn't report the full breadth of the problem.

Unconfirmed reports claim 5 have died in Tibet from the virus.

All Roads Lead to Dark Winter