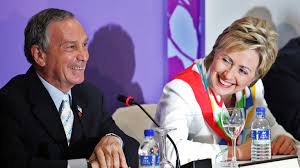 Oh, and until just a couple of years ago, he was a Republican. Billionaires like Bloomberg change parties to where ever they see their money will go the farthest for them achieving their goals.

Right now, that is the quickly fracturing Democrats, who are staring at a revolt to Bernie Sanders that doesn't sit with Wall St. at all.

It's also obvious that Bloomberg is animated by personal animus towards Donald Trump that I suspect is as much about Mike's ego as it is his desire to protect Wall St. from having any of its dirty laundry aired during a Trump 2nd term.

Because with the failure to convict Trump in the Senate those that were behind that coup attempt are now uniquely exposed to his retribution. And that trail of tears for all involved leads right back up to Hillary Clinton's poisoned garden of a 2016 presidential bid.

With the Democratic presidential field a uniquely inept mix of the hopeless and insane Bloomberg using saturation advertising to buy himself wins in delegate-rich red states with weak Democratic parties like North Carolina, Florida and Texas is a good strategy, if he was interested in winning.

But he's not. He's running to clear the field for Hillary.

What If The Fed Did Nothing?