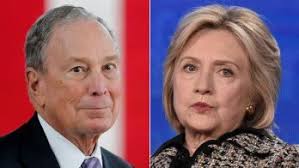 Oh, no. I'm just waiting and watching as this plays out. I will support whoever the nominee is because I think, for all the reasons you can imagine, and here in Puerto Rico there are many, we need to have a new president for our country.

Clinton also added that she wants to "see Puerto Rican American citizens be able to vote for president."

Clinton's remarks were made after she was questioned about a report from Matt Drudge that claimed Bloomberg was considering asking Clinton to join his presidential ticket.

Drudge shared the report on Saturday after sources close to the New York billionaire's team stated he was considering Clinton as a choice and a poll found that the two would do surprisingly well with voters.

Earlier this month, Clinton would not rule out becoming vice president and told Ellen Degeneres, "I never say never because I do believe in serving my country."

In contrast to her remarks to Ellen Degeneres, Clinton said on January 27 that she could beat President Trump if she ran against him in November.