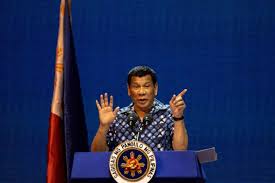 His notification starts the clock running on a six-month deadline. If no new agreement is negotiated, the VFA is dissolved.

What triggered the decision?

Duterte was offended that one of his political allies who led his anti-drug campaign in the islands, which involves extrajudicial killings of drug dealers, had been denied a U.S. visa.

Yet, Duterte has never been an enthusiast of the U.S. presence. In 2016, he told his Chinese hosts in Beijing: "I want, maybe in the next two years, my country free of the presence of foreign military troops. I want them out."

The Pentagon is shaken. If there is no VFA, how do we continue to move forces in and out to guarantee our ability to honor the 1951 Mutual Defense Treaty? Defense Secretary Mark Esper called Duterte's action "a step in the wrong direction."