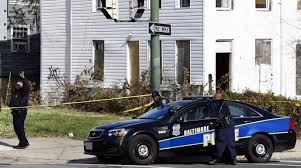 Khaled Heeba's family said he was killed just before Friday prayer, while he was delivering pizza in west Baltimore.

"If you know him, you had to love him, because that's the type of good person he was," said Kimberly Mcmanaway, who worked with Khaled.

His co-workers at Vizzini's Pizza said he was beyond a delivery driver.

"He was our friend and family. You couldn't have a better person that what you had in Khaled. Why somebody would do this, I don't know," Mcmanaway said.

Police said they don't know how the incident started, but that Khaled was out on delivery at the time.

"Putting in a hard day's work and he didn't come home. Help us figure it out," said Baltimore Police Detective Donny Moses.

Police on Monday showed WJZ a video of the person they said is the killer who shot Khaled on the run.

"The suspect was an unknown male, who looked to be about 5'9″ with a slim build, who was dressed in all black," Det. Moses said.