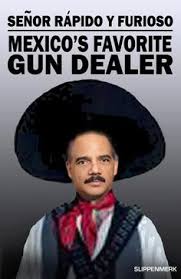 "The undercover agent told the men the money for the guns, including machine guns, came from Mexico," reports Bob Price at Breitbart.

U.S. District Court Judge Micaela Alvarez sentenced two South Texas men to federal prison for their roles in selling guns to a buyer they believed would be transporting the guns to Mexico. The two men pleaded guilty to the charges on November 25, 2019, according to information obtained from the office of the U.S. Attorney for the Southern District of Texas, Ryan Patrick.