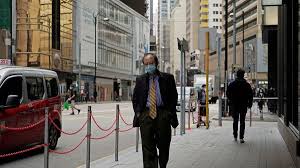 "It's just becoming an unstable environment to raise a child in," said Ian Jacob, owner of a construction materials company who is leaving Hong Kong with his wife and 10-year-old daughter after 15 years, according to the Straits Times.

"We watched as the situation got worse and worse," he said of the political unrest which has unfolded over the past year.

With classes suspended again amid the coronavirus outbreak, the prospect of more home schooling for their 10-year-old daughter pushed them to take refuge in Auckland, New Zealand.

Mr Jacob said they'll be moving back there for good once the school year ends in Hong Kong. -Straits Times

According to the Times, expats who have been thinking about leaving the politically unstable city have a sense of urgency due to the coroavirus, which has officially killed over 2,000 people and infected over 75,000.

Meanwhile, Hong Kong Chief Executive Carrie Lam has been oddly criticized for closing schools until mid-March due to the coronavirus threat, unlike Singapore.