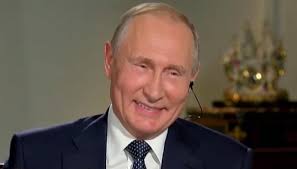 Nope - Putin's at it again!

In an unbelievable Thursday report, the Times claims that five anonymous sources leaked the details of a Feb. 13 briefing to House Lawmakers by intelligence officials warning that Russia has already been interfering in the 2020 election.

So - the Kremlin wants the president who, according to political analyst Ian Bremmer, has been tough on Russia - instead of, say, Bernie Sanders - the Democratic socialist who honeymooned in Moscow and would likely crash the US economy, thus weakening it, with his draconian socialist policies.

The Times report gets better; the House briefing reportedly angered President Trump so much that he berated outgoing director of national intelligence, Joseph Maguire, and that he was particularly irritated that Rep. Adam Schiff (D-CA) was included in the session. The report implies that Maguire was replaced with pro-Trump ambassador to Germany, Richard Grenell, as a result of the incident.