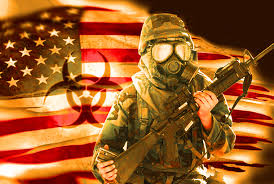 Given the history of the United States government and its military industrial complex concerning biological and germ warfare, the use of these agents against large populations, and the desire to create agents that are race specific strains, these powerful entities have become compassionless purveyors of death to the innocent. Manmade viruses meant for warfare, whether for economic destruction, starvation, or mass death, are the workings of the truly evil among us. Predation at this level is relegated to those in power; a president for example, could give the order to wipe out millions due to his inability to control a problem he caused and perpetuated, and then lay blame on the victims.

Who would ever have believed that modern warfare could be more brutal, more torturous, more painful, and more harmful to innocents, especially children, than past atrocities committed in war. Memories of millions sent to their deaths fighting in trenches, cities obliterated by atomic bombs, entire countries destroyed, and millions purposely left to starve in order to appease some tyrant or elected "leader."