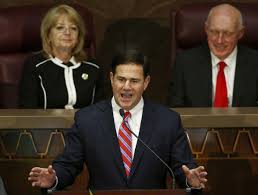 "We can confirm that legislation related to a constitutional ban on sanctuary cities will not receive additional consideration this session — a decision made jointly by legislative leadership and the Governor," Wilder said over text. "Sanctuary cities are illegal in Arizona. It will remain that way, and our members will remain vigilant to keep these bad policies out of Arizona."

The proposal was one of many of Ducey's legislative priorities.

"The Governor stands firmly with the people of Arizona in opposition to sanctuary cities — a California-style policy rejected overwhelmingly by voters in Tucson last fall," Ptak said. "The Governor is appreciative of Representative Shope's leadership on this issue, and while these proposals will not be moving forward, the state of Arizona will continue to oppose any effort to create sanctuary cities."