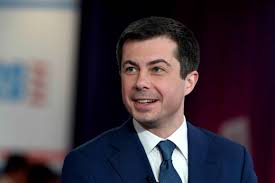 Let's just cut right to the chase with a couple questions that the media has glaringly failed to consider about the top-polling Democratic presidential candidate. First, the most obvious one. How on earth does a young Midwestern mayor, regardless of his polished resume, jump to the front of the serving line, past hundreds of veteran politicians who have quietly nurtured presidential ambitions inside of the Beltway their entire lives?

As The Economist emphatically stated this week, "Mr Buttigieg is ridiculously young to be doing so well."

Second, if the mayor of South Bend, Indiana (pop. 101,166) is now in serious contention to challenge Donald Trump in November, what exactly does that say about the depth of the Democratic bench, loaded as it is with Senators, House members, Governors and various state officials with far more political experience and acumen?

While the Oval Office has seen its share of pretenders, and even actors, the great majority of those men who made it to the pinnacle of power have spent at least some time in high political office before contemplating a presidential run. Incidentally, it is on this particular point, political experience, which could make a Trump-Buttigieg debate a very interesting spectacle. Although Buttigieg has limited political experience, Trump had none before he entered the White House, although certainly proving his abilities once in office.

Joe Biden DENIES sexually assaulting member of his Senate staff in 1993 after she claims...

Could a 'Draft Cuomo' Movement Be in the Democrats' Future?