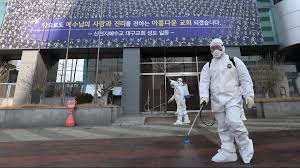 After four largely uneventful weeks in which South Korea had confirmed just 30 cases, the number of cases has soared five fold in just three days, rising from 31 cases on Tuesday  to 156 on Friday (local time), in what appears to be a very aggressive exponential increase.

Notably, thirty-nine of the cases are related to a cluster at a church in Daegu, the city that "looks like a zombie apocalypse",  according to a statement from Korea Centers for Disease Control.

Mayor Kwon Young-jin made a televised address, urging citizens to wear masks and remain indoors while revealing his concerns that the contagion could rapidly overwhelm the city's health infrastructure. "We are in an unprecedented crisis," the mayor told reporters, unaware that the last thing he can afford to do in times like these is tell the truth.