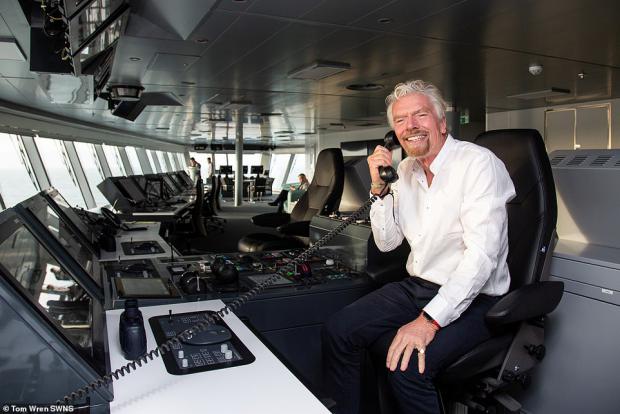 The luxury 17-deck ship - Scarlet Lady - is the first of four Virgin Voyages ships that will come into service each year for the next four years.

The interiors of the adult-only ship were masterminded by a team of top designers, including Tom Dixon.

The Roman and Williams design studio, known for its work with notable celebrity residences as well as eye-catching hotels like The Standard Highline in New York City, also got on board with the cruise project.

On the entertainment front, Sir Richard and his team have pushed the boat out. Travellers are told to 'grab your glad rags, throw on your dancing shoes and be prepared to be amazed'.

Each ship contains 1,330 cabins and 78 Rockstar suites, two of which offer 'full rock star treatment', including in-room guitars and amplifiers.

Interior shots show how the suites come with floor-to-ceiling windows and the bathrooms have been finished with marble-clad walls, roomy showers and deep bathtubs.

Did I miss the chapel in the video?