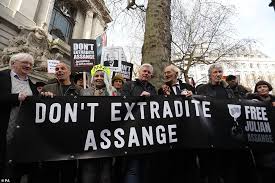 Hundreds of people, including designer Vivienne Westwood and Pink Floyd bassist Roger Waters, have gathered in London to protest against the extradition of Julian Assange and demand that he be released.

The Wikileaks founder has been held on remand in Belmarsh since last September after serving a 50-week jail sentence for breaching his bail conditions while he was in the Ecuadorian embassy in London.

He entered the building in 2012 to avoid extradition to Sweden over sex offence allegations, which he has always denied and were subsequently dropped.

The 48-year-old is wanted in the US to face 18 charges, including conspiring to commit computer intrusion, over the publication of US cables a decade ago. If found guilty he could face up to 175 years in jail.

Amongst the crowds of protesters who have gathered outside Australia house, is Mrs Westwood, 78, who was pictured wearing a head band emblazoned with the word 'Angel'.

Surrendered Without A Shot...