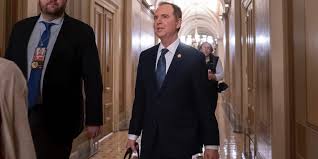 Nor is there any reason for Russia to prefer Trump, who has done nothing for Russia.  Indeed, Trump has imposed sanctions and endangered Russia by withdrawing from arms control agreements.  The claims of interference reported by the New York Times come from unnamed sources, described as "US intelligence officials," in a recent briefing of the House Intelligence Committee organized by Rep. Adam Schiff.  We do not even know if such claims were made or whether this is another of Schiff's many inventions planted on the New York Times, Schiff's partner in crime and fake news.

Schiff is the highly partisan chairman of the House Intelligence Committee who was a driver of Russiagate and the subsequent effort to impeach President Trump.  He is a known liar, having been caught in numerous lies and misrepresentations.  Schiff arranged these new claims of Russian interference in order that, in the event of Trump's reelection, the Democrats can tie up Trump for the entirety of his second term with bogus charges just as they did Trump's first term. In that way the Democrats, the political party of racial minorities, sexual perverts, and immigrant-invaders, can prevent Trump from politically organizing white Americans whose lives, careers, and safety have been harmed by global US corporations transferring their jobs abroad and by the increasing attacks on white Americans as racists and "white supremacists."  Despite the First Amendment, white Americans are losing the right of free speech, because if they "offend" a protected category of person when they exercise their free speech right, they risk being fired from their job and being investigated for a "hate crime," a crime that can only be committed by white people. White Americans are slowly being marginalized, and, rightly or wrongly, they see Trump as a protector.