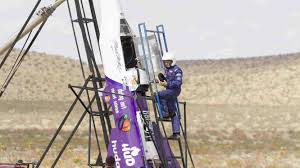 Daredevil 'Mad' Mike Hughes has died after launching himself into the air on a homemade rocket that later crash landed, possibly due to a parachute malfunction.

Hughes, 64, had been a daredevil and conspiracy theorist who believed the earth was flat and hoped to launch himself into space to prove it.

Footage of the incident shows Hughes propelling himself into the air as a parachute suddenly comes off the steam-powered rocket on Saturday, near Barstow, California, before it crashed.

The rocket then plummets back down to Earth and crashes with Hughes still inside.

A previous, successful launch by Hughes in a similar rocket showed a parachute deployment, much-like the technology used by Russia's Soyuz spacecraft to slow and cushion the capsule's landing on hard ground.

Parachutes appeared to work that way on Hughe's March 24, 2018 launch. It was not clear if that was his intention during Saturday's ill-fated flight.

Justin Chapman, a freelance journalist, who witnessed the crash with his wife said Hughes' rocket appeared to rub against the launch apparatus, which might have torn the parachutes attached to it.