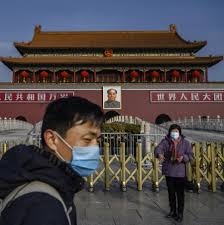 The Maoist totalitarian state is being reborn in China under Xi Jinping, who is constructing a personality cult akin to that which surrounded the late "Great Helmsman." Xi is determined to strengthen his and the Chinese Communist Party's authority. However, the response of the Chinese government to the COVID-19 virus has undermined the CCP's credibility—and ultimately may threaten the party's hold on power.

Despite the modern world's many extraordinary medical miracles, the potential of a pandemic, an easily transmitted disease with a high fatality rate, continues to worry medical professionals. Most people have heard of the Black Death, when bubonic plague killed between 75 and 200 million people in Eurasia in the mid-1300s. A century ago the Spanish Flu infected a half billion people and killed between 20 and 50 million worldwide, more than the number of deaths in World War I.

I would highly doubt that. It may replace some of the local leaders but it would take a massive upheaval to get rid of the communist's in power there. I suspect many generals have a plan B to make themselves hero's who will ensure dissent goes away more efficiently and install another iron fisted government.