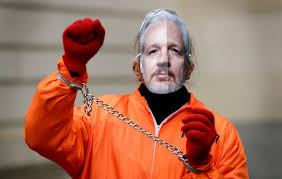 Julian Assange was handcuffed 11 times, stripped naked twice and had his case files confiscated after the first day of his extradition hearing, according to his lawyers, who complained of interference in his ability to take part.

Their appeal to the judge overseeing the trial at Woolwich crown court in south-east London was also supported by legal counsel for the US government, who said it was essential the WikiLeaks founder be given a fair trial.

Edward Fitzgerald QC, acting for Assange, said the case files, which the prisoner was reading in court on Monday, were confiscated by guards when he returned to prison later that night and that he was put in five cells.

The judge, Vanessa Baraitser, replied that she did not have the legal power to comment or rule on Assange's conditions but encouraged the defence team to formally raise the matter with the prison.

The details emerged on the second day of Assange's extradition hearing, during which his legal team denied that he had "knowingly placed lives at risk" by publishing unredacted US government files.