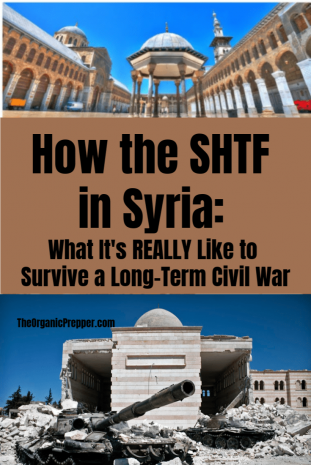 A couple of decades ago, Syria was clean, modern, and safe. Now it's filled with ruined buildings, death in a thousand brutal ways, hunger, and filth.

How did this happen? How did a city like Aleppo (or more specifically "East Aleppo,") once filled with markets, mosques, and beautifully kept ancient sites, turn into a place of devastation and despair? (For some before and after photos, check out this article. Most people don't realize what a beautiful place Syria was before the war.)

Some background on how it all began

In 2003, young Syrians sat in their living rooms and watched on television as the American military rolled into Iraq amid missiles, bombs, and the requisite "Shock and Awe." This was not the first experience their country had with America's military in the region but it was the first time this generation had seen the war with the eyes of adults. Iraq, after all, was not Afghanistan. It was practically next door.

The invasion and subsequent war were bad enough. The occupation, however, was even worse.

While Americans were being fed faked videos of celebrating Iraqis pulling down the statues of Saddam Hussein, Syrian media was showing a very different version of events; i.e. the US military terrorizing, killing, and maiming the Iraqi people.

2006 came around and these same Syrians witnessed Iraq fall into chaos.

Iraqis were no longer united against the American invader, they were divided Sunni against Shi'ite, Muslim against Christian, territory against territory. As the Pentagon sat back, pleased in the chaos it had created, Syrians sat in dismay at how the Iraqis could descend into civil war, particularly when the clear enemy was on its soil and flying its enemy flag.

Most of all, Syrians were grateful. "Thank God," they said. "Thank God we live here and we don't have to deal with war." One Syrian girl told me, "At the time, all I could think was how horrible it must be to live through something like that. I was so glad to live in Syria. I couldn't imagine war coming here."

In 2011, the US occupation had built one of the largest embassies in the world. The Iraqi state was weak and squabbling but effectively acting as a caretaker government under the watchful eye of the American empire.

The opposition to America's presence in Iraq was still there as was the knowledge that Syria was on the list to be destroyed. Syrians had heard Wesley Clark list also and, besides, they already knew Syria was on the chopping block if Washington, Tel Aviv, and the powers behind them ever had their way and the guts they would need to start the war.