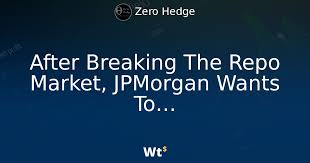 Dimon's arrange aside, nothing in that exchange explained why Dimon is richer not only than Mayo, but 99.9999999% of the US population; the real reason why Dimon was richer than most is that every few years, JPMorgan, now America's biggest bank, gets a generous taxpayer or Fed bailout even as Dimon claims he never needed that bailout and would have been perfectly ok if unlike his failing peers, he was left to his own devices. He did that in 2008, and he did it again today.

As a reminder, back in 2008, JPMorgan - alongside most other major US commercial banks - received a $25 billion bailout as part of the TARP program (which was created by current Minneapolis Fed president Neil Kashkari). With the money, JPMorgan, whose fate was inexorably intertwined with that of its its weakest peer and counterparty, would have ceased to exist long ago. However, thanks to the Fed's generosity which not only did not shutter any bank but rewarded bank CEOs handsomely for blowing up the financial system in 2008, JPMorgan flourished, eventually becoming the largest US commercial bank, and made Jamie Dimon into a billionaire. Of course, being a master at revisionist history, Jamie has repeatedly claimed that he didn't need the $25BN TARP bailout, and that the bank would have been perfectly ok, but he only took the money under duress and to appear in solidarity with his far more insolvent peers.

A Long Way Down To Value Still

The Quarter-End Pension Rebalancing Is Over

"The Biggest Decline Ever": Goldman Now Sees US GDP Crashing 34% In Q2

Rabobank: "Policy Awe Is Behind Us While Sheer Economic Shock Is About To Overwhelm Markets