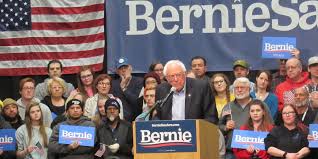 "Well, you know, James Carville is well-known for spouting off his mouth without always knowing what he's talking about. And I intend to stay focused on fighting for the American people because what they don't need is 20 more years of performance art on television. And that's what James Carville and a lot of those folks are expert at … a lot of talk and not getting things done for the American people."

This is what they've got? James freaking Carville?

Yes, twelve years after he mismanaged Hillary Clinton's campaign into a thoroughly delightful but stunningly unlikely defeat, James freaking Carville is the best footsoldier that MSNBC can muster up in the tireless (and tiresome) war they are fighting against Bernie Sanders, against the will of the voters, and against any chance of progressive change in our lifetimes.

I have no idea how—-or even if—-James Carville is still alive. He seems to be permanently coated in the death-spray of a female praying mantis, some corrosive fluid that's permeated his brain and turns him more bitter by the millisecond; as you watch him writhe around in his seat among the standard MSBNC crew of failed Democratic Party apparatchiks, Chris Matthews-type mental cases, and ex-CIA bosses with weak-ass gravitas, he seems even more disturbed than the rest of the panel; it seems like he's about to start consuming his own flesh, live, on national TV.