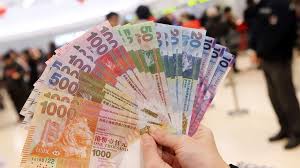 In a desperate effort to "do something" about the economic collapse that the region is suffering...

Hong Kong's Financial Secretary Paul Chan Mo-po is set to unveil a HK120 billion relief deal which includes 'helicopter money' - giving every Hong Kong permanent resident over the age of 18 a cash handout of HK$10,000 (around US$1,300) to, reportedly, ease the burden on individuals and companies.

As SCMP reports,  Chan has been under intense pressure from lawmakers to dose out a heavier aid to help the city ride out of the economic slump - battered by the coronavirus epidemic and months of anti-government protests, sparked by the now-withdrawn extradition bill.

Hong Kong is suffering an unprecedented slump in consumption, with retail sales having collapsed...

And as we detailed recently, Sun Hung Kai Properties, which is among Hong Kong's largest mall owners, said on Wednesday it would reduce February rent by up to 50% for most of its tenants, in an effort to stabilize economy and protect employment.

"The Hong Kong government should avoid the temptation to increase taxes or cut expenditures at a time when the city should in fact protect and even step up its domestic support programs," said John Timpany, partner and head of tax in Hong Kong at KPMG China.

Will the Dollar Always Rule? Ask the Archduke

Pandemic Pandemonium: The Tides Of Globalization And Financialization Reverse