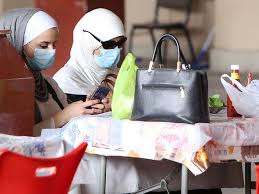 Unprepared countries across the Middle East are scrambling to respond as they've begun recording more and more coronavirus cases.

While official government figures across the region likely fall short of the true number — for example hard hit Iran may have already seen 50 deaths according to one lawmaker in the city of Qom despite the Health Ministry denying this high figure and confirming only 12 deaths to date — it's deeply alarming that Covid-19 has been confirmed in multiple corners of the Middle East, from Egypt to the Gulf to Iran.

Notice also that the United Arab Emirates now has at least 13 confirmed cases, in a worrisome sign in could hit the gulf region hard, given also it's a major international transport hub straddling east Asia and the West.

The WHO is especially concerned of an outbreak among refugee populations in war-torn regions of Iraq and Syria.

"Refugees and internally displaced populations across Iraq and Syria have been identified as the most vulnerable groups in the region, should the spread of the virus become a pandemic," The Guardian reports of recent statements.

"Health officials in both countries remain under-equipped to deal with such a a reality that seems more possible with each passing day," the report added.