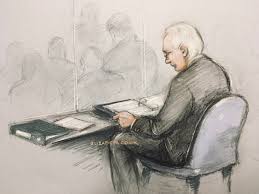 Will British officials turn their back on 800 years of progress on the human rights wrested from King John at Runnymede? Are there today no "English Nobles" to thwart the obscene "legal" proceedings aimed at extraditing WikiLeaks publisher Julian Assange to a US prison for publishing the truth about US and UK war crimes?

At Monday's court hearing in London, James Lewis QC, argued the US case using information the US gave him from "secret sources" in Iraq and Afghanistan. Here's Mr. Lewis:

"The US is aware of sources, whose unredacted names and other identifying information were contained in classified documents published by WikiLeaks, who subsequently disappeared, although the US can't prove at this point that their disappearance was the result of being outed by WikiLeaks."

With the CIA and Defense Department saying, in effect, "Trust Us", what could possibly go wrong? – aside from a publisher of accurate information spending the rest of his life in prison – and all future journalists running the same risk, should they run afoul of US authorities.