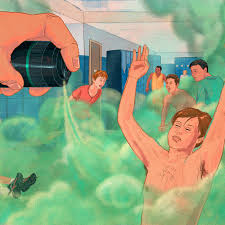 Was there ever a time more suited to the whims of a male American teen than the early aughts? The video game Grand Theft Auto III had just shipped. LimeWire made Shaggy's entire discography free and accessible. Hollywood was bullish on Seann William Scott.

And then, in 2002, Axe arrived. A body spray meant to split the difference between deodorant and cologne, Axe bulldozed the senses with a fragrance so strong it seemed to precede the bodies it clung to — like Febreze, or a bad reputation. Almost 20 years later, it hasn't managed to shake its association with the scent of middle school.

Its introduction to drugstore aisles was attended by a series of notorious ad campaigns built on naughty jokes and blunt promises, the crux of them involving a parade of women lusting after some schmo. Over the next decade, Axe evolved to include deodorant sticks, shower gels, and hair care. But even as its product line began to reflect the refined grooming habits and shifting sensibilities of the modern metrosexual man, its branding stuck to old-school attitudes about romance. In ads suggesting that its scents would overpower all resistance, Axe pitched itself as artillery for a perpetual battle of the sexes — the howitzer of attraction. It was a winning formula: Axe sold $71 million worth of bottled machismo in 2006, just four years after entering the US market.

Today, the iconic ad campaign feels fossilized, obsessed with a bygone vision of masculinity. (Axe rebranded in 2016, and although it still enjoys annual global revenues of more than $1 billion — comparable to a decade ago — it has posted year-over-year declines in the cultural cachet department.) Nevertheless, those 2000s-era commercials continue to notch thousands of views on YouTube. There's the one in which an attractive spokeswoman spanks herself with the arm of a mannequin she just demo-sprayed. There's the one with the guy made of chocolate who gets licked in a darkened movie theater.