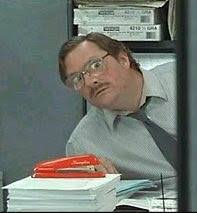 Mike Judge's workplace satire "Office Space" was a bona fide box-office flop when it grossed a measly $10.8 million in 1999. But once the comedy was discovered on DVD and cable, "Office Space" became a cult sensation, spreading concepts like "flair" and "assclown" across pop culture.

Servers at T.G.I. Friday's might want to raise a glass to "Office Space," because according to a 2004 New York Magazine interview with Judge, the restaurant not only got rid of its dorky striped shirts but also the mandatory flurry of pins and buttons — known as "flair" — a few years after the film was released.

It was all because of the criticism Jennifer Aniston's character, Joanna, suffered as a waitress at Friday's-esque restaurant Chotchkie's, for not wearing enough pieces of flair.

"We need to talk about your flair," says her boss, played by Judge. "Fifteen is the minimum, okay?"

"About four years after 'Office Space' came out, T.G. I. Friday's got rid of all that flair, because people would come in and make cracks about it," he told the magazine. "So, maybe I made the world a better place."

"Office Space," which marked the live-action directorial debut of Judge, best known at the time for the animated TV series "Beavis and Butt-Head" and "King of the Hill," revolves around everyman Peter Gibbons (Ron Livingston), who works as a programmer at a company called Initech where he hates his job and is constantly bothered by his odious boss Bill Lumbergh (Gary Cole).

His best friends at work are his fellow programmers Samir (Ajay Naidu) and Michael Bolton (David Herman), who live in fear that they will be fired.

Peter's life changes when his girlfriend takes him to an occupational hypnotherapy session. When the therapist dies while Peter is still hypnotized, he wakes up the next morning carefree and relaxed. He breaks up with his girlfriend and begins dating Joanna. And instead of getting in trouble with his new laid-back attitude at work, his bosses love his newfound perception.

When Peter discovers that his friends will be fired, the three hack the company's computer accounting system, diverting small monies into their account. But, of course, it doesn't turn out quite the way they expected.

"Office Space" was based on the "Milton" animated shorts Judge created and voiced in the early 1990s, as well as his own experiences working as an engineer — which years later, also made Judge's "Silicon Valley" feel painfully real.

"The main message of the movie is, you got to give yourself permission to do the things that make you happy even if it's going to disappoint your employer," explained Livingston, who is currently playing an executive who commits suicide in ABC's "A Million Little Things."

For the past 20 years, he noted, "People come and tell me that the movie changed their life. It's like after seeing the movie, it gave them the confidence to get out of whatever it was they were doing that was making them miserable and move on to something else. I only hear from the people for whom that worked out, but hopefully there's not too many that regret it."

In an email interview, Judge said he gets the same reaction from fans. "I haven't had anyone say they quit their job after watching the movie and wound up on welfare," he added.