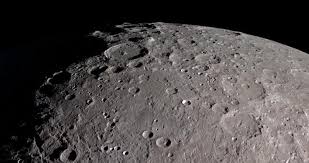 China's Chang'e 4 lunar lander has won the race to the dark side of the moon, allowing the country to be the first to uncover its secrets.

The craft, which landed on the moon in January 2019, deployed the Yutu-2 rover to investigate the Van Kármán crater near the moon's south pole.

The device used a lunar penetrating radar to probe 131 feet beneath the surface in order to determine the moon's 'internal architecture', which was found to consist of three distinct layers.

Researchers said the data information gathered rover, along with data from the previous near-side Moon explorations, could help shed light on the geological history of the lunar surface.

As most of the knowledge on lunar regolith comes from Nasa's Apollo and the Soviet Union's Luna missions to the near side of the Moon, scientists were, until now, uncertain whether these observations would hold true elsewhere on the lunar surface.

Dr Elena Pettinelli, a professor in the mathematics and physics department of Roma Tre University in Italy and one of the study authors, told the PA news agency: 'These series of ejecta or deposits came from different impact craters that were created during the evolution of the Moon's surface.