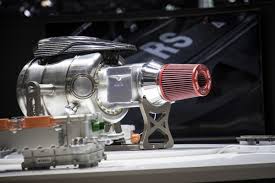 The company is working to transform the range-extending micro-turbines powering up the motors of the 1,300-hp Ren into standalone generators for commercial and passenger car use. It'll start with a 45-kW version to wire into commercial electrical grids before shrinking the tech down even more to put inside everyday electric passenger cars.

With a triple-bubble canopy, laser lighting signature, blade-like rear fin and six-motor + dual-turbine drive layout, the Ren was a ridiculous creation with even more outlandish performance estimates — 1,287 hp, 1,243 miles (2,000 km) of total range and 31.5 mpg, just to pick out a few. But it served as a show-stopping testbed for something more interesting and potentially impactful: the efficient, versatile micro-turbine generator technology that Techrules is now developing into a more humble, mass market-friendly package.

Techrules announced this week that it will begin limited series production of a commercial micro-turbine generator unit in June, launching full-scale mass production by year-end. Sized down from the 80-kW turbines installed on the Ren, the 45-kW commercial unit will be designed to take the place of a diesel generator, either in powering systems like air conditioning and heating at remote sites or for use as a backup.

Each micro-turbine generator burns fuel like ethanol, methanol or biogas to produce electricity. Generated heat is captured for use as thermal energy, and Techrules imagines its tech finding use in large buildings and complexes, such as universities, hospitals and military bases. The turbines are designed to operate more efficiently and cleanly than other generators.