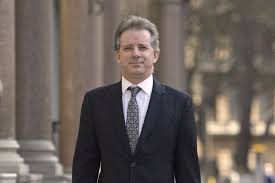 Arthur Snell, managing director for Steele's company, Orbis Business Intelligence, this week penned a letter to the editor titled "Trump-Russia Dossier Was Valid," published in the United Kingdom's the Sunday Times. It was in response to an article last month about a newly released analysis by British author Rupert Allason, who goes by the pen name Nigel West, who concluded, "There is also a strong possibility that all Steele's material has been fabricated."

"Steele and his company, Orbis Business Intelligence, firmly reject this," Snell said. "We stand by the integrity and quality of our work."

Snell claimed Steele and others at Orbis "have been close allies of America for more than three decades" and that "this has not been changed by the dossier." He claimed Steele reported his salacious and unverified findings to the FBI "solely to assist" the bureau.

"Thereafter Orbis has co-operated extensively with serious U.S. investigations on Russian interference in U.S. elections, with the approval of the U.K. authorities," Snell wrote. "This hardly suggests, as your article contends, that our actions have damaged the UK-US intelligence relationship."