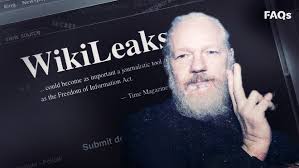 That was when WikiLeaks, ostensibly at least, served his purposes by releasing hacked DNC emails that were rather unflattering to his opponent, Hillary Clinton. The MAGA crew must've agreed with him regarding the Julian Assange-headed web publication at the time: Trump carried all four battleground states, which propelled him into the White House. He's had more than three years, now, to acclimate to his new digs and, somewhere along the way, pulled a 180 on Assange, whom his administration now labels "an enemy of the state who must be brought down." So it is that this week, Assange began the fight – perhaps, quite literally, for his life – in the UK against the Justice Department's stated intent to extradite and try him in the United States.

A journalist, a publisher, has been labeled by the U.S. Government as an "Enemy of America." Now that's dangerous language with scary historical precedent in America and abroad. Recall that the term has been used against "unfriendly" press elements by others: the military junta in Myanmar; Venezuela's Hugo Chavez; Russia's Boris Yeltsin and Vladimir Putin, President Richard "The press is your enemy" Nixon; and, you know, Cambodia's Pol Pot, and Soviet Premier Josef Stalin, for starters. In our own history, press suppression, especially in times of war, is as American as apple pie. During World War I, the (still on the books) 1917 Espionage Act was used to wage all-out combat against any and all critical media sources. Sometimes persecution bordered on the Orwellian absurd. For example, in September 1918, even The Nation was banned from the mail for four days by the US Postal Service simply for criticizing the pro-war labor leader Samuel Gompers.