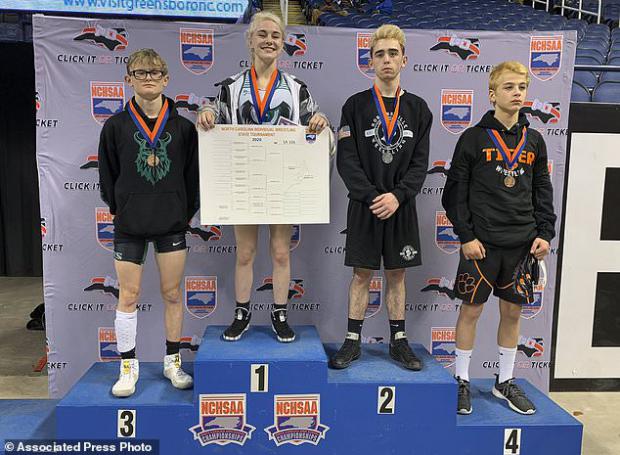 Heaven Fitch, of Uwharrie Charter, became the first female to win one of the association's individual state wrestling championships.

The 16-year-old, a senior at Uwharrie Charter High School in Asheboro, won the 106 pound (48 kg) weight class at the 1A division on Saturday.

A photo released on the North Carolina High School Athletic Association's official Twitter account shows her beaming, standing next to three boys who finished behind her in the tournament.

She had a 54-4 record for the season and won Most Outstanding Wrestler for the 1A division.

'I'm just really overwhelmed ... It's like insane what I've done, it's not fully sunken in yet,' she told WRAL-TV.

She added: 'I kind of dominated the match if I'm being honest.

'I'm just glad I can be a role model for people younger than me and it's so insane to be inspiring to others. To think that others look up to me is kind of crazy.'

Footage from the event showed the crowd cheering her name as she emerged victorious.