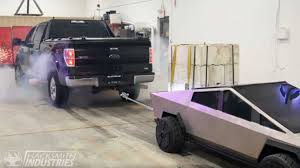 The Tesla Cybertruck goes up against a Ford F-150 in tug of war. Which pickup truck will win? Well, all it not quite as it may seem in this matchup. There's a bit of a twist which we'll get to in a bit.

When Tesla debuted its Cybertruck, it featured a video showing the electric truck easily beating the Ford F-150 in a tug of war contest. The was a lot of controversy surrounding the matchup though and there's was even hint of a rematch from Ford. However, Ford later backed down from challenging the Cybertruck in a tug of war challenge.

That didn't put an end to the F-150 versus Tesla contests though. They continued on even if unofficially and even in some of the weirdest of ways.

Now, in the latest round of weird rematches between the Cybertruck and the Ford F-150 we present this super powerful, tri-motor, half-size Tesla Cybertruck from The Hacksmith. If you've been following our coverage here at InsideEVs of The Hacksmith's Cybertruck then you are well aware of just how brilliant this replica is. If not, follow the links further down below for some background.