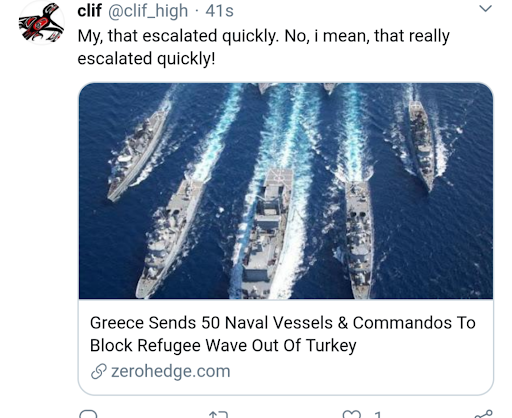 Germany's Bild newspaper reported Friday that Greece is taking further emergency measures to prevent Erdogan from effectively "opening the gates" on new waves of refugee and migrant hordes seeking entry to the EU, noting the country "completely closed off its borders with Turkey: not just for refugees, but for EVERYONE."

The newspaper said 50 naval ships, likely most of them small patrol vessels, have been deployed by the Hellenic Navy to ensure those coming out of Turkey don't get through.

"According to BILD information, the government sent 50 warships to the Greek islands to protect the EU's external borders," the German tabloid said. "Ten helicopters are also supposed to secure the transitions to Turkey on land."

Greece's Ekathimerini newspaper said military commandos were being sent to key crossings following an emergency meeting of key government officials Friday to deal with the crisis:

Patrols along the land and river border in northeastern Evros have been bolstered since Friday morning, when the first large groups of migrants began to arrive following an announcement on Thursday night by a Turkish government official saying that Ankara would no longer try to prevent Syrians fleeing war in their country from attempting the crossing to the European Union.

The army has also dispatched two commando units to help the Hellenic Police guards at the border, and particularly to patrol the more dangerous sections of the Evros River.