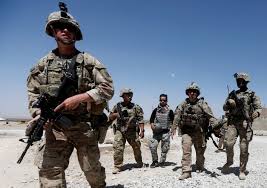 Now these guys, some still in the army, most long out, run the political gamut from centrist conservative to libertarian (very common among military officers) to mainstream liberal. None are as radical, or full-throated antiwar, as me. Nonetheless, instructively, most responded with some – albeit often sarcastic – level of tacit support for any and all plans to (eventually, and hopefully) get the troops out of Afghanistan. Furthermore, the fact that nearly all of them lost soldiers directly under their command in one of the war's most dangerous years, within one of the most dangerous provinces of the country, hasn't diminished this pro-withdrawal sentiment.

My artillery officer – who I profiled a couple years back in the American Conservative – responded first, with: "Victory or loss, thank Allah we're out of that quagmire." Then my first executive officer (XO, my second in command) made a joke about the artilleryman's use of the word "quagmire," asking "What would Rumsfeld say?" (Bush's former Secretary of Defense famously eschewed this descriptor for the Iraq War) That XO's thoughtful successor then wrote: "I'm really glad we are getting out. I hate that it will take 14 months, but I'm thrilled…". That former lieutenant of mine raised an important point. Much of the critical (and fair) response to my cautious social media support for Trump's "peace" "deal" centers around either the rather protracted withdraw timeline or skepticism about the sincerity of the U.S. position more generally.