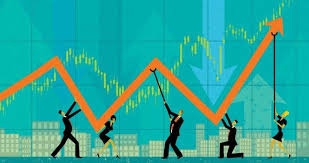 Australia's Central Bank cut interest rates and stated it will most likely further ease in order to make up for China's Coronavirus situation and slowdown. They reduced to 0.5%, a record low. Other countries are doing the same thing, if not more so.

Our Federal Reserve has us paying higher rates than many others, when we should be paying less. Tough on our exporters and puts the USA at a competitive disadvantage.

Must be the other way around. Should ease and cut rate big. Jerome Powell led Federal Reserve has called it wrong from day one. Sad!

In a surprise move the Federal Reserve announced an intra-meeting reduction of 50 basis point cut in the federal funds rate, lowering the target rate to 1 to 1.25%.

The Fed stated, "the fundamentals of the US economy remain strong", but the "coronavirus poses evolving risks to economic activity."

It is hard to see how "easy money" offsets supply disruptions in supply chains and global travel.  And although many companies have alerted investors to the prospect of lower earnings in Q1 there is no hard evidence (job layoffs) of any disruption to the US economy.

Policymakers have once again been forced by "politics" and not "economics" to make a move in official rates.