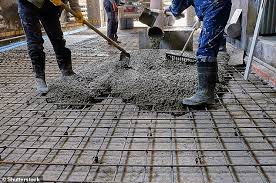 Now, researchers at Swinburne University have developed a new type of concrete that can not only bend better, but doesn't require cement to make, reducing its environmental footprint.

Put a huge weight on top of a pillar of concrete and the material will barely notice it's there. But apply that force to the center of a pillar, and it will bend and break relatively quickly. This weakness is because concrete has high compressive strength but lower tensile strength.

In response to that, bendable concrete has been created and improved over the last few decades. And now, the Swinburne team has improved the recipe further, by reducing how much energy it takes to produce the material, as well as cutting carbon dioxide emissions during production.

The biggest polluter in concrete production is cement, the "glue" that holds the wet mixture together. Making cement requires high temperatures, so it gobbles up huge amounts of energy and churns out a lot of greenhouse gases. And as useful as bendable concrete is, it still involves this process.