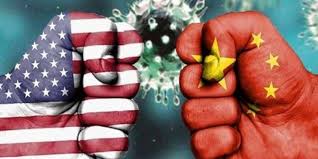 In it, the author suggests that the coronavirus outbreak is much worse in the United States than authorities are letting on - while noting that President Trump praised China's measures to control the outbreak during a recent press conference. Xinhua also points out that the US stock market "has plummeted continuously, with a drop of more than 12% in just one week."

The article then suggests the travel ban imposed on China - including the restriction of people who have visited China - was 'unkind,' and has had a 'great economic impact' on the country.

US government officials, such as Secretary of Commerce Rose, US Secretary of State Pompeo, and US White House Economic Adviser Navarro, have publicly gloated over China's new crown pneumonia epidemic, saying that the outbreak of the new crown pneumonia epidemic in China is good for the United States and will help companies return to the United States.