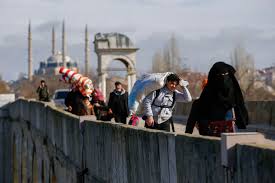 Here's something the mainstream media, which is trying to stuff as many migrants as possible into the West, don't want you to see. Thank heavens for Russian journalism.

Ankara reported the exact number of refugees who had already left Turkey but had not officially entered Greece.

Thousands of refugees are now pulled west of Turkey.

All these people have been besieging the border for the past few days and have not stopped trying to break into Greece. The border for most of them is still closed, but more and more refugees continue to stay here every day. They set up natural tent camps right on the side of the road but there are not enough tents in which you can hide from the piercing wind. You have to sleep right on the ground, make bonfires. Entire families flee to Europe, including small children.