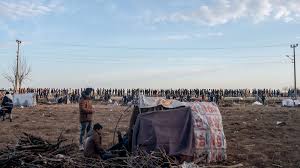 "We'll get you next time!" they shouted at a small group of men who had made it over and fled.

Two hundred miles to the south, on the border island of Lesbos, locals angrily blocked a dinghy full of migrants from Turkey, including a pregnant woman and children, from getting off on a pier.

"No more!" they yelled, cursing.

On land and at sea, one thing is clear along Greece's meandering border with Turkey: This is not 2015 anymore. Then, while much of Europe was convulsed with anger and fear as more than a million asylum seekers poured in from distant wars, Greeks helped rescue refugees at sea, or greeted them with empathy as they traversed the country en route to northern Europe.

The citizens of the island of Lesbos were even nominated for a Nobel Peace Prize.

Now, the reaction is overt hostility. A new center-right Greek government has temporarily suspended accepting asylum applications and pledged to summarily expel those who come in order to discourage migrants. And ordinary citizens, many of whom who are fed up, are taking matters into their own hands.