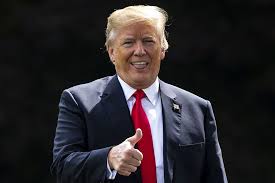 Trump, who had only token opposition, now has more than the 1,276 delegates needed after winning Tuesday´s Florida and Illinois primaries, according to The Associated Press' delegate count.

When it comes to the race itself, President Trump appears to lead both former Vice President Joe Biden and Senator Bernie Sanders in hypothetical head-to-head match-ups in Florida, according to a new poll.

Univision found 48% of voters in Florida said they would vote for Trump over Biden, while 45% would go for the former vice president.

Should Sanders be the nominee, the poll suggested that Trump would again secure victory in the Sunshine State with 49% of the vote while Sanders would draw in just 42%.