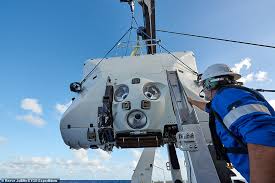 Isle of Man-based Eyos Expeditions is offering three members of the public the chance to tag along on a dive it's organising to the deepest spot in the Western Pacific trench, known as Challenger Deep - 35,853ft (10,928 metres/6.79 miles) beneath the surface. It is, the company says, the most exclusive destination on the planet.

The lucky three travellers will fly to the Pacific island of Guam. From there, they will board the expedition vessel, DSSV Pressure Drop, and spend a day at sea before reaching the Mariana Trench.

The expedition, which is set to take place in June, will then use a submersible vehicle called Limiting Factor to dive to the bottom of Challenger Deep.

The vehicle has been pressure-tested to 14,000 metres (45,931ft/8.69 miles) and has already dived to the bottom of the Mariana Trench five times.

Each guest will get an individual trip.

According to Eyos Expeditions, which has teamed up with Caladan Oceanic for the trip, the occupants of the submersible are completely protected by the 90mm-thick titanium sphere and 'experience no pressure changes or physiological stresses at all'.