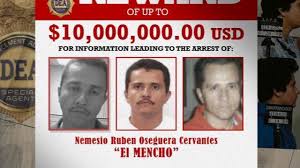 Cartels and other criminal groups that hold sway over large swaths of territory are blamed for much of it, warring with each other and preying on local populations in places where the state, especially local authority, is weak or even in cahoots with the gangs.

In its latest National Drug Threat Assessment, published early this year, the U.S. Drug Enforcement Administration lists six Mexican criminal organizations as having significant trafficking impact on the United States: Sinaloa, Jalisco New Generation, Beltran-Leyva, Juarez, Gulf and the Zetas. But experts say most of the cartels have been splintered into competing factions in recent years, and today only Sinaloa and Jalisco meet the traditional conception of cohesive organizations with a large footprint. There are also other smaller, more local outfits.

Sinaloa, long led by notorious kingpin Joaquín "El Chapo" Guzmán, who is serving a life sentence at a Colorado supermax, is based out of the Pacific coast state of the same name but has a presence in much of the country, sometimes via allied local proxies. Sinaloa survived an apparent power dispute after Guzmán's extradition that ended with the capture of cartel figure Dámaso López in 2017 and the surrender of his son. Today Guzmán associate Ismael "El Mayo" Zambada and Guzmán's sons, known as "los Chapitos" or "the little Chapos," are believed to be firmly in control.